Lana Condor, who rose to fame for playing the character of Lara Jean in the “To All the Boys” film series is gearing up to play another exciting high school character as Erika in the upcoming Netflix series “Boo, Bitch”.

Erin Ehrlich of Crazy Ex-Girlfriend and King of the Hill fame will serve as the screenwriter of the upcoming series while Lauren Iungerich of On My Block and Awkward will serve as showrunner for the series as well as the main writers. The story for Boo, Bitch on Netflix is a modern take on the original script written by Tim Schauer and Kuba Soltysiak.

From release date, cast, plot and trailer, Here is all we know about Boo, Bitch on Netflix.

Netflix has released the exciting first trailer of Boo, Bitch featuring Lana Condor as Erika, a high school student who is up to something big!

Watch the trailer below!

According to Netflix, Boo, Bitch will release on July 8th, 2022.

What Netflix ‘Boo, Bitch’ is All About?

Boo, Bitch on Netflix is a coming-of-age story featuring Erika, a high school girl who is upset at not being popular as Riley who has a history of constantly dissing and undermining Erika throughout their high school journey. As Erika finally decides to step up for herself and steal the limelight, things go pretty interesting at a high school party that she had not anticipated.

Check out the first-look photos from ‘Boo, Bitch’ below: 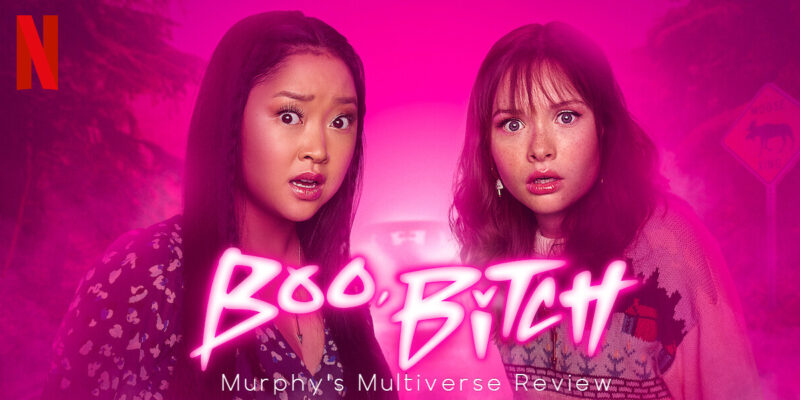 The story of Boo, Bitch follows a girl in the last weeks of her school and is upset that she is not as famous as other girls. Finally, she decides to catch the limelight at a high school party however, the outcome is not exactly what she expected.

Read the synopsis of “Boo, Bitch” below!

“Erika Vu (Condor) is completely bummed out. She in her final weeks of high school and nobody even knows her name, thanks largely to popular mean girl Riley, who has constantly dissed and undermined Erika throughout the school. But when her best friend Gia convinces Erika to go to a big high school party, Erika overcomes her shyness and becomes the toast of the evening — even capturing the attention of sexy Jake C, Riley’s recent ex. However, when the hungover Gia and Erika retrace their steps the day after to find Erika’s missing necklace, they may have a surprise in store — a shock that takes Erika’s finally on-track life in a wholly unexpected direction — to say the very least.”

Here is the full cast of “Boo, Bitch” on Netflix:

How Many Episodes Will be in Boo, Bitch?

Reportedly, there will be eight episodes of Boo Bitch on Netflix. The limited series will feature each episode with a run-time of 30 minutes.

What is The Production Status of ‘Boo, Bitch’?

Boo, Bitch on Netflix is currently in the post-production phase. The series entered production in late August 2021 according to media reports. Though IMBd Pro has not listed any filming dates, but on May 13th the status of the upcoming Netflix series was changed to “Post-Production”.