The British television documentary series Clarkson’s Farm is returning to Amazon Prime Video with its second season that will follow eremy Clarkson and his farm in the Cotswolds. Clarkson’s Farm season 2 will continue the journey of Jeremy and his wife Lisa Hogan, reopening the doors to Diddly Squat. The season of the documentary series was no less than a surprise TV hit of the year 2021 that put monitoring journalists and a farmer, Jeremy Clarkson, as the new face of British agriculture, which was thought to be very unlikely. Now that Amazon Prime Video is all set to announce the release date for Clarkson’s Farm Season 2, here is what we know so far about the series.

Jeremy Clarkson was infamous for shouting out supercars on Top Gear and The Grand Tour. However, his sole focus is now on sheep shearing and crop rotation as he is the horsepower of the latest Ferrari. Clarkson’s Farm has won critical acclaim and helped Clarkson and his agricultural advisor Kaleb Cooper to earn recognition at the British Farming Awards. Their hard work paid off and the Diddly Squat team was signed up for a season 2 by Amazon Prime Video.

Scroll down below to know the release date, cast, trailer, and more about Clarkson’s Farm.

While the official trailer for Clarkson’s Farm Season 2 is yet to be revealed, Amazon Prime Video released a short video last year featuring Clarkson and Kaleb who announced season 2 right from the farm.

Moreover, we have also gotten our hands on some pictures of the Didly Squat team who has reunited to bring season 2 of the documentary series. The fans of Clarkson’s Farm can also keep an eye on Kaleb and Clarkson’s Instagram accounts where they have been keeping their followers up to date with amusing BTS shots and their lives in Chipping Norton.

What is The Amazon Prime Release Date For Clarkson’s Farm Season 2?

Jeremy Clarkson has a reputation, courtesy… his opinions. So, when Amazon Prime was launching a new show about Clarkson trying his hand at farming, the show was obviously titled ‘Clarkson’s Farm’.
But, to whip up pre-release interest for the show, 1/3 pic.twitter.com/H8QcOazVR8

Amazon Prime Video is yet to reveal the release date for Clarkson’s Farm Season 2. Given that the first season of the docu-series was released in June 2021, we can expect a similar schedule in 2022. However, since we have already entered June 2022, it seems like season 2 of Clarkson’s Farm will release a little late. Meanwhile, we are keeping a close watch on Prime Video to know when exactly we can see Clarkson back on the tractor in the field.

What Made in Clarkson’s Farm Season 2 is All About?

Clarkson’s Farm Season 2 followed an intense, backbreaking, and entertaining year in the life of Jeremy Clarkson, Britain’s most unlikely farmer. Best known for traveling the world and screaming his lungs out in supercars, Clarkson has turned his focus to a career in agriculture after he bought a 1,000-acre farm in Chipping Norton.

Season one of the series follows Clarkson’s journey as he steps into a new profession. We see him battling the worst farming weather in decades, unresponsive crops, disobedient animals, and worst of all,  an unexpected pandemic.

We see Clarkson’s transition into a became a conservationist, scientist, engineer, accountant,  shepherd, shopkeeper, midwife, and tractor driver as he gives it all into farming. During all of this, he learns about the adversity and challenges facing the modern farmer.

As the series takes the Grand Tour presenter right into the farming field, way out of his comfort zone, Clarkson’s Farm surprised the critics and the audience equally. After Clarkson became an advocate for the British farmers, he along with his helper Kaleb, also managed to win the hearts of the farming community and the duo was presented with the 2021 British Farming Award. Jeremy and Kaleb were recognized by 700 peers at Birmingham’s National Conference Centre.

Check Out The First-look Photos From Amazon Prime Video Clarkson’s Farm Season 2 Below: 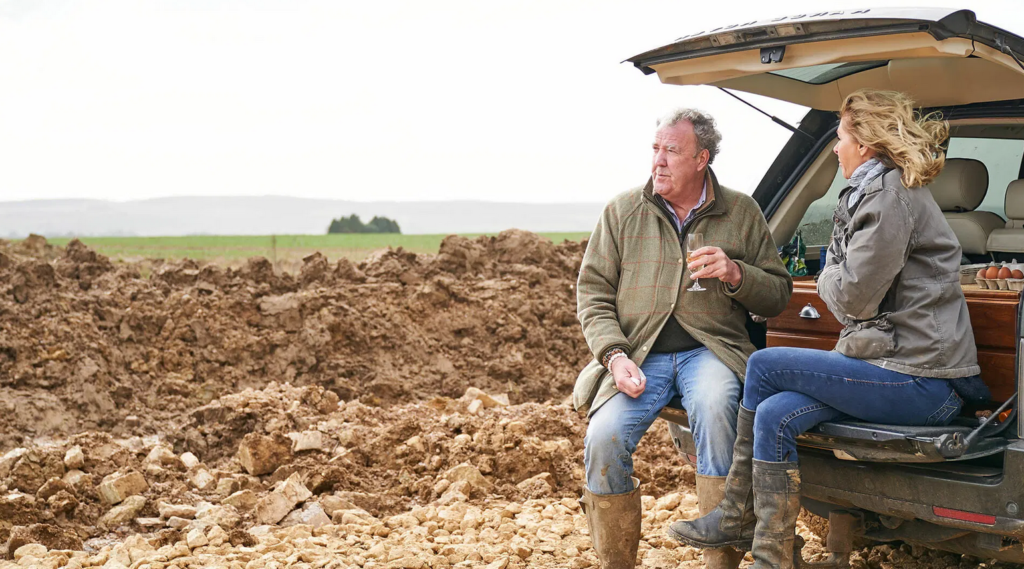 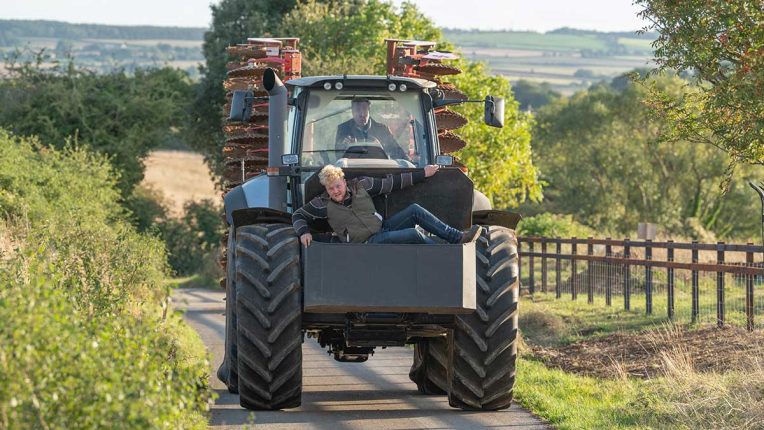 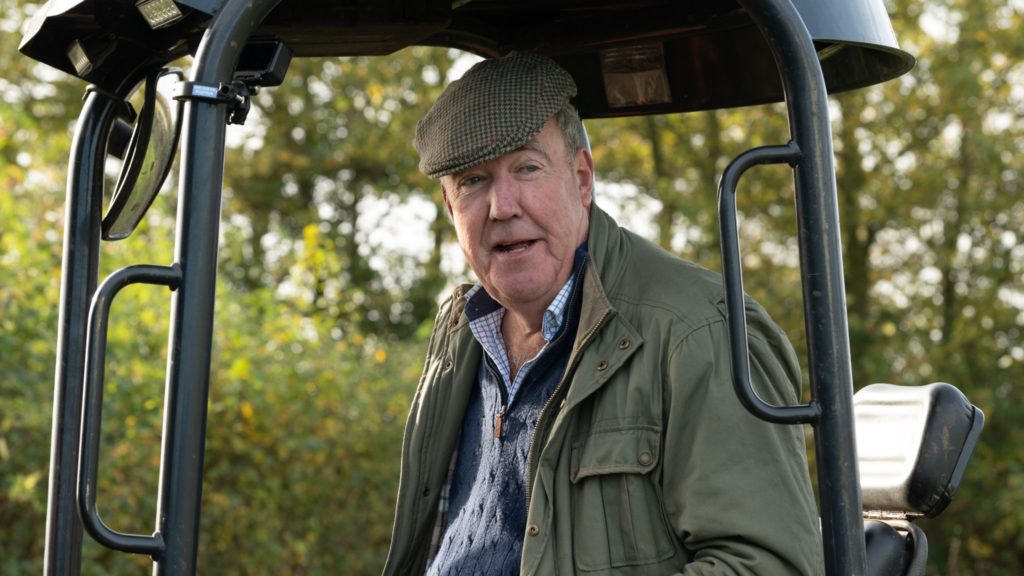 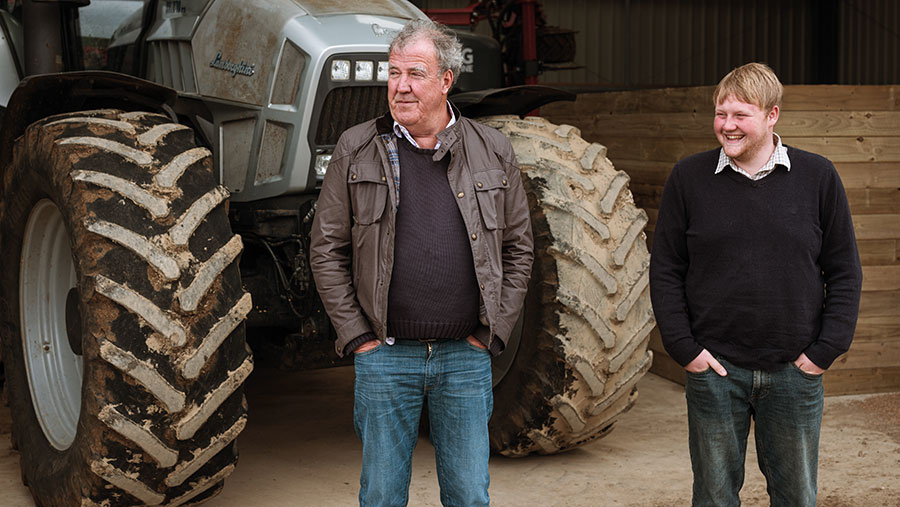 What is The Plot & Synopsis of Clarkson’s Farm Season 2?

Clarkson’s Farm Season 2  will focus on Jeremy’s second year on Diddy Squat Farm as he plans on diversifying and expanding into new areas.

His helper Kaleb Cooper, who became a fan’s favorite in season one,  will also be back on his tractor, keeping a track of everything Clarkson is onto. The duo will be joined again by Gerald, ‘Cheerful’ Charlie and Clarkson’s wife and Diddly Squat shopkeeper Lisa Hogan.

Here is The Synopsis of Clarkson’s Farm Season 2:

“Follow Jeremy Clarkson as he attempts to run a farm in the countryside. With no previous farming experience, Jeremy contends with the worst farming weather in decades, disobedient animals, unresponsive crops, and an unexpected pandemic.”

How Can I Watch Clarkson’s Farm Season 2?

You can watch Clarkson’s Farm Season 2 on Amazon Prime Video. If you are not already subscribed to the OTT streaming platform, you can visit the official Prime Video website or app to buy a subscription tier and gain access to its premium library.

What is The production Status of Clarkson’s Farm Season 2?

Clarkson’s Farm Season 2 is currently in the production phase. We will keep you posted with all the latest updates about the docu-series.

Will There Be a Season 2 of Clarkson’s Farm 2?

Answer: Yes, Amazon Prime Video confirmed season 2 of Clarkson’s Farm which is expected to release in 2022.